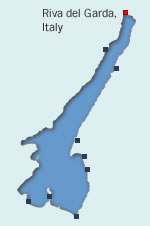 The second biggest settlement on Lake Garda with nearly 16000 inhabitants, Riva del Garda has long been seen as a strategically important town. The town controlled the northern half of the lake and also had an influence on trade routes north and south coming and going over the Alps. It's not surprising therefore that much of its history and its important sights relate to wars and fortifications. 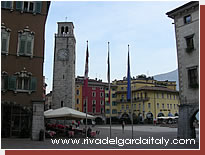 Torre Apponale
The town tower is located in the heart of Riva del Garda, in the Piazza III Novembre near the waterfront. It was built in the 13th century as another means of protecting the access to the lake and the town around it and at one point was connected to the Rocca via an underground passage. The Torre Apponale is 34 metres high and can be climbed by the 165 steps during the summer months. At the top of the tower is the "Anzolim" ("little angel") weather vane - a symbol of Riva del Garda.

The original settlement was thought to have been in Roman times, although there are archaelogical remains in the area which may point to an earlier date in the days of the Etruscans.

Like many towns on trade routes in this region, the settlement experienced the waves of invasion from the north following the fall of the Roman Empire. Even entering a period of relative stability in the Middle Ages, it still had to worry about the warring Italian city powers of Trento and Verona nearby and the claims from further away of Venice and Milan. 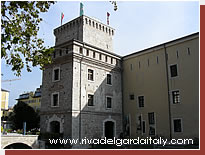 Rocca
The site of the Rocca - near the harbour of Riva and surrounded by water - was first used in the 12th century as a protective fortification for this important strategic settlement on the northern end of Lake Garda. The current structure dates back to the Hapsburgs, although they converted some of the original buildings when they transformed it into a barracks for the Austrian forces. These days the civic museum is located inside the building with changing exhibitions about the culture and history of the area.

Eventually this part of northern Italy came under control of the Tyrolean counts who ruled from Merano and then Innsbruck, and subsequently under the Austrian Hapsburg rulers. In fact, in common with the rest of the region, this area only became part of modern Italy at the end of the First World War. (In fact, the town was involved in the fighting, leading to some severe damage to buildings at the time.) 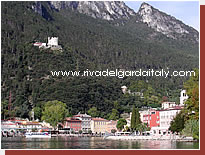 Bastione
This fortification can be seen from the lake on the wooded hillside a couple of hundred metres above the town of Riva del Garda. Built on the lower slopes of Monte Rocchetta in the early part of the 16th century, it was designed as a protective structure for the settlement below as Venetian power diminished. Its military value was eventually destroyed by the French army in the 18th century and the remains now serve as a museum and as a restaurant with a panoramic view. The Bastione can be reached in half an hour's walk from the town.

As well as the strategic interest, Riva del Garda also developed as a tourist centre from the mid-19th century onwards with the advent of "Kur" tourism in the German-speaking world (the closest to this in English is probably "taking the waters" in spa towns like Bath or Leamington). The town became popular with the nobility and the rich, and the cultural elite - such as Thomas Mann, Frederick Nietzsche and even D.H. Lawrence - gave the town a refined air.

These days Riva is one of the most popular resorts on Lake Garda, while its smaller neighbours Torbole, to the east, and Arco, to the north, are especially well-loved by younger and more sporty visitors - Torbole for its windsurfing and Arco for its rockclimbing.